Large scale events on the main stage on the Main Square, cosy music events at the Old Cloister Ruins in the heart of the inner city, international audience by the thousands, music workshops, and countless leisure activities await participants at the biannual Csiperó Festival in Kecskemét. Groups invited to the international children and youth meeting mostly come from Europe, but groups from other countries of the world are also welcome. Accommodation is provided by families in Kecskemét during the festival, and in the following year the youths of the host families from Kecskemét pay an exchange visit to their guests. Children and youth groups attending the festival are asked to prepare with a performance characteristic of them to be performed on the open-air stage on the main square of Kecskemét that can be understood by the audience without any linguistic difficulties. The festival is not a competition: each and every performance is regarded to be of equal value. The rationale behind the event is to accomplish mutual acceptance and equal opportunities for everyone.

We would like to make sure that no child gets excluded from this international experience, so all our programmes and events are free.

The Csiperó Festival is held in Kecskemét, a town situated in the middle of Hungary between the two main rivers of the country, the Danube and the Tisza.

The historic main square of the town on the Great Plain serves as a terrific venue for festivals.

For more information about the history of the town go to: kecskemet.hu

Usually, Children's Meetings are officially started on a Sunday on the main square of Kecskemét. As a custom, several groups go on stage to present a brief selection of their performances. The Mayor of Kecskemét hands the town keys to the two youngest children at that year's Meeting, a boy and a girl, then dozens of balloons reach the sky with a fanfare that indicates the beginning of a week's wonders.

The importance of the Children's Meeting is well reflected by the fact that each year the President of the Republic in office comes to take part in the inauguration ceremony as the main patron of the Festival. 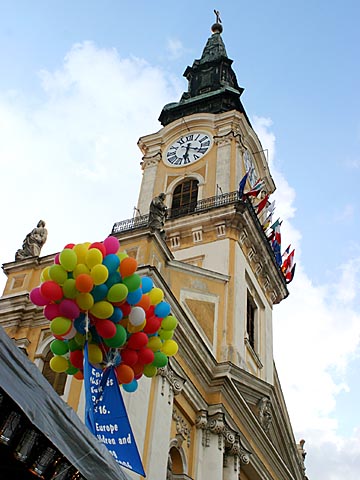 A speciality of the inauguration ceremony in 2004 was that the one week Festival was officially opened by a five-year-old child, his Excellency, Zakarias Rodrigo Massagrande.

The Opening Ceremony of our festival is always followed by various other events like the concert of the popular Csík zenekar, the European and World Cup final which was followed by thousands of people on the main square of Kecskemét. This is the way this 'Children magic' normally starts in our town. 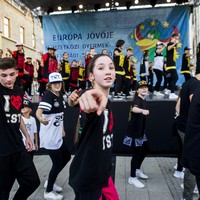 One of the primary aims of the children’s meetings is to get children acquainted with the diversity of Europe. In order to do so, children’s groups from abroad give 10 to 15-minute performances on the main square of Kecskemét during the day. The performances represent a unique opportunity to give a real taste of the traditions of their region and country, and to demonstrate the most amazing elements of their folk music and folk dances or to present their modern dances with high acrobatic skills. The shows are enjoyed by local residents, guest children and numerous tourists alike. Groups are required to give a performance 2 to 3 times during the week to the audience’s delight on the main square crowded with people. The national costumes of the groups are a unique speciality. The colourful outfits of the Polish, the Portuguese, the Turkish, the Korean, or the Hungarian groups from Transylvania are a spectacular sight on their own. Several groups have already appeared at a variety of festivals abroad, nevertheless, giving a performance in front of the audience in Kecskemét is an exceptional experience for them.

Over the past years, several outstanding Hungarian and foreign performances have appeared on the main stage on the main square, many of them regularly.

These performances are equally popular with participants, guests and local people. Some of them are followed by teaching folk dances to the audience so as to allow the audience to give a deeper insight into dances as well, not just folk music. By dancing together they become more familiar with and more open to other people’s cultures and customs. 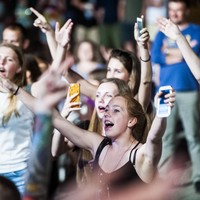 As the years passed, the number of foreign groups kept increasing, and there were more and more unique performances to be put on stage. Among them, several choirs came to the meeting, whose performance required a venue other than the main stage on the main square. It was in 2002 that looking for a new venue, the organizers spotted the old cloister ruins by the Franciscan Church, which proved to be an ideal location for the ‘Little Night Music’ – more cosy concerts starting at 10 p.m. after the evening concert finishes on the main stage. It is hardly surprising that when the wonderful melodies start in the shimmering light of torch flames, the extraordinary atmosphere attracts more and more people wandering over from the main stage to the old cloister ruins.

A whole day of the one-week event is spent together outdoors, when all the participants gather for a picnic, which provides the possibility of abandoned relaxation without any restrictions. There is a wide choice of programmes for children to join in the fresh air: dancing, music, tug-of-war, football, volleyball, basketball, dragon-boating and handicraft workshops - no one is left without something to their liking.

There is a small celebration for host and guest children celebrating their birthday during the meeting. Besides the birthday wishes they receive, there is a little show and surprise for them. 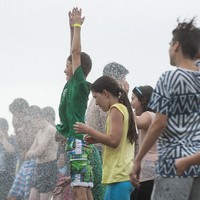 The greatest sensation of the day, however, is the water cannon, the story of which is now a legend. In 1991, at the first meeting there was scorching heat on the picnic day in the woods. We had asked for a fire-engine from the Hungarian Army in case there was a fire. The soldiers having seen the parched string of children decided to cool them down and set the water cannon into operation. Everyone ran there to enjoy the cooling drops of water. This is how the water cannon became such a tradition that everybody is looking forward to it - even those who have never experienced it themselves, only heard of it.

The Joy of Hungary

Right from the beginning many Hungarian groups living beyond the borders participated in the Future of Europe International Children and Youth Meeting. There were five such groups at the first meeting, and over the years their number has been increasing. We have had the pleasure to receive young Hungarians from the dispersion as well, such as from the Netherlands and the USA. 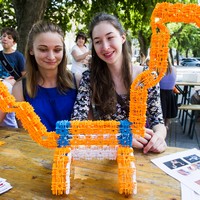 Since 1991 nearly 150 Hungarian groups living beyond the borders came to enjoy the hospitality and care of the mother country. Thus in the year 2000 the Future of Europe Association created a separate programme and named it 'The Joy of Hungary'. During this Hungarian-Hungarian day they play a leading role in the Children’s Magic, and they can give an introduction to the traditions of their region and present the most stunning elements of their folk music and folk dances. The purpose of the programme is to enable Hungarian youngsters from the Carpathian Basin to meet and get to know each other’s traditions in order to enhance their knowledge and awareness of being Hungarian.

Closing of the ceremony

On the last day of the meeting, on Sunday morning, the Future of Europe Association welcomes the foreign and Hungarian group leaders in the Ceremonial Hall of the Town Hall of Kecskemét, and thanks them for their devoted contribution necessary to the successful organization of the meeting. The prizes For the Future of the Children of Europe are also awarded at this time.

At the closing ceremony of the meeting, some of the participating groups give short performances on the stage on the main square. At the end of the ceremony the children return the key to the town to the mayor of Kecskemét, and the mayor acclaims them honorary youth citizens of the town. Then the colourful, diverse, multilingual crowds of children join the dance to the sounds of the Csiperó song and say farewell to the lovely mascot figure of the meeting with this last dance.

The ceremony is followed by an amazing concert and then a laser show and festive fireworks close the event – this is how the Future of Europe Association wishes a safe journey home the every Csiperó participant.

It was in 1993 that the first ’Csillagszemű’ camp was organised following the idea of Gábor Farkas' late first wife, Andrea. Being a kindergarten teacher herself, she suggested inviting some Hungarian kindergarten teachers from over the borders and organising a series of separate professional programmes for them.

The first camp proved to be so successful that it has been organised regularly ever since, and each gathering is focused on a specific professional issue.

The venues of the camp are the Kindergarten in the Árpád District of Kecskemét, and Szórakaténusz Toy Museum and Workshop.

The Treasure Hunting Camp is a follow-up programme for teenage journalists during the international children’s meeting. It is organised by the Treasure Hunting Association. The week-long camp allows young apprentices to learn and apply the basics of journalism. The results of their work are made public in print at the end of the week: on the closing day a booklet entitled CSIPERO.K. is published including the interviews, reports, and drawings made during the week. The young participants of the camp work in small groups focusing on different aspects: ‘Szép-képírók’ prepare reports, interviews and illustrations for CSIPER-O.K., ‘Műferdítők’ translate the articles into English.